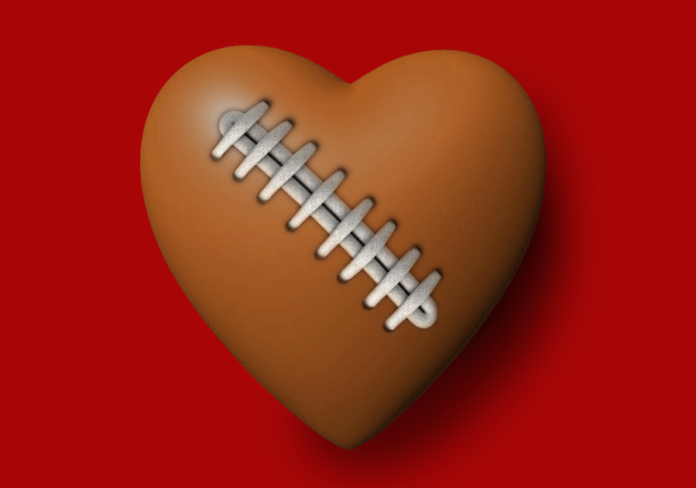 Every football season entails risks for athletes. But where COVID-19 differs from ACL tears, concussions and the seasonal flu — and why it has generated discussion around the heart condition myocarditis — is that its long-term effects aren’t fully understood.

A rare inflammation of the heart’s muscle tissue, myocarditis is associated with viruses such as the common cold, Hepatitis B and C and mononucleosis, per the Mayo Clinic.

“The actual entity myocarditis is something in sports cardiology we’ve known about for many, many years,” said Dr. Jonathan Kim, founder of Emory’s Sports Cardiology Program. “It’s a known common cause of sudden cardiac death in athletes.”

Because COVID-19 is so new, researchers have yet to perform studies large enough to reliably determine how often and how severely it impacts the heart. Kim said COVID-19’s novelty and the publicity around instances when otherwise healthy athletes develop coronavirus-related heart conditions put myocarditis at the forefront of return-to-play conversations.

Given the concerns, the SEC’s Medical Guidance Task Force updated its COVID-19 protocols on Sept. 9 to include a series of tests that measure heart rate, heart strength and levels of troponin, a protein which indicates heart damage when its presence in the blood is increased.

“We didn’t actually check kids for myocarditis when they got the flu and [when] they had other viruses,” head coach Kirby Smart said in a virtual press conference on Sept. 15. “So now we’ve actually put ourselves in a better position, because … we’re checking everything now.”

Ohio State physicians published a research letter on Sept. 11 in which they used a cardiac MRI to test 26 athletes recovering from COVID-19 for evidence of myocarditis. Despite normal heart function and no elevated troponin levels, they found other evidence of myocarditis in four athletes. Two were asymptomatic, and two had mild symptoms.

The conclusions were based on the accepted criteria for diagnosing myocarditis via MRI — fluid build-up causing inflammation in the heart muscle and heart muscle damage evidenced by an MRI-specific chemical agent.

With a small sample size, researchers acknowledged in the study that “COVID-19-related myocardial injury in competitive athletes and sports participation remains unclear.”

While the researchers suggested that the findings question the efficacy of the SEC and other conferences’ non-MRI-based cardiac tests in finding myocarditis, they also noted large-scale studies are still necessary. The lack of a baseline cardiac MRI could have also led to misinterpreted conclusions.

“[The Ohio State researchers] did not have a control group,” Kim said. “That’s really important from a science standpoint because you really have no idea what the clinical significance is if you don’t have a comparable group.”

Kim said the sensitivity of cardiac MRI, normally used to diagnose people with a high probability for an illness in question, can pick up abnormalities that may lead to false positives. Additionally, cardiac MRI has not been used to screen for myocarditis in athletes after experiencing mild flu symptoms, for example, so the severity of heart effects from COVID-19 versus other viruses is not clear.

The bottom line, in Kim’s opinion, is that the Sept. 11 research letter did not provide adequate data to require a cardiac MRI for screening athletes with mild or no COVID-19 symptoms, and it also didn’t determine whether college sports should continue. But that doesn’t mean the results should be thrown out.

“By no means am I saying ‘Don’t pay attention to it, it’s not important,’” Kim said. “It is important, but we need better, more rigorous data.”

Until September, the public was unaware of how many Georgia players had contracted COVID-19 since returning to Athens for voluntary workouts in the summer. More than three months after issuing an open records request, the Atlanta Journal-Constitution reported on Sept. 18 it received documentation of seven positive tests on the Bulldogs’ football roster, as of June 8.

Given the lack of transparency from the UGA Athletic Association and its delay in responding to records requests, the program’s total number of cases as of press time is unknown.

While there is no indication if UGAAA documents describe the level of cardiac testing players received, Smart said baseline heart exams gathered for every athlete through the tests mandated by the SEC will help identify any abnormalities.

“So, after they have COVID or maybe they have antibodies for COVID, we’re able to test them and look and see what differences there are in their heart,” Smart said. “And we’re very fortunate to be able to do that, which makes me much more comfortable with the decisions that are made.”

Marti described Georgia’s COVID-19 protocols as “thoughtful,” based on money and resources dedicated to its testing strategy.

“These players have a bright future,” Marti said. “Nobody wants them to be negatively impacted by having a chronic problem.”

The effects of COVID-19 on the heart will become clearer over the course of this season. Kim said he is working with colleagues on a registry of college athletes diagnosed with COVID-19 to help develop more robust data.

“We’re going to be able to answer a lot of these questions about prevalence — how much cardiac injury are we actually seeing in athletes,” Kim said. “We’ll actually get those answers hopefully in the next several months.”

In the meantime, players will assume an unknown level of risk if they choose to play after a positive coronavirus test. But as Marti said, cardiac risks are always present for high-impact athletes.

The feeling among Georgia football players is that the football program and conference’s medical guidelines will keep them safe.

“We feel that we’re safest playing here, playing in this facility,” redshirt sophomore tight end John Fitzpatrick said in a virtual press conference on Sept. 18. “And [with] the protocols that they’ve put in place, we don’t have any worries at all.”