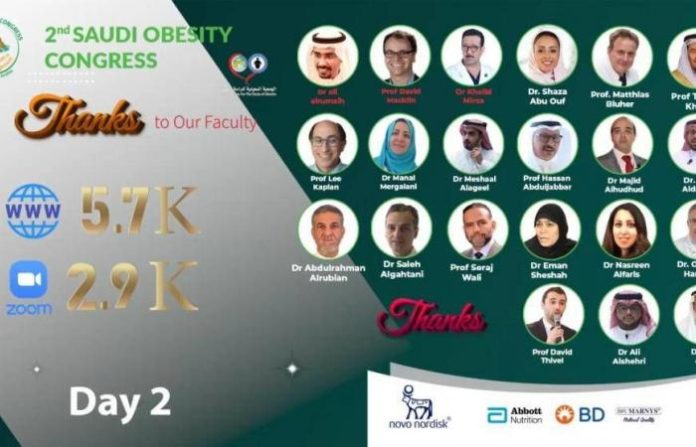 The international company Novo Nordisk, in cooperation with the Saudi Society for the Study of Obesity and the Saudi Scientific Society for Diabetes, held the second Saudi obesity conference, held on the second and third of October in 2020, through the virtual conference feature, which gathered a large group of doctors from several specialties such as internal medicine doctors And gynecologists, obesity surgeons and dieticians. The conference began with a welcome from Professor Abdul Rahman Al-Sheikh, who began with an introduction to obesity, as it is one of the chronic diseases that begin when the body mass rate rises above 30 kg / m2, and results from many causes, including genetic, environmental and societal. Adding that an increase in the amount of fat in the body results in a defect in the function of adipose tissue, which ultimately leads to many health and psychological damage. According to the statistics of the Saudi Ministry of Health established in 2020, the rate of obesity reached 59%, of which 28.7% were severely obese, while 31% were overweight.Obesity complications

Dr. Afaf Al-Shammari highlighted the complications of obesity, which increases the chance of developing health diseases, the most famous of which are: stroke by 3%, high blood pressure by 51%, cardiovascular disease, the most famous of which is coronary heart disease by 8%, diabetes, especially type II, by 21%. Knee osteoarthritis by 52%, fatty liver disease by 29%, an increase in ovarian cysts by 9%, and an increase in the incidence of some mental illnesses such as depression by 19%. Dr. Afaf also presented the latest studies that indicate a relationship between obesity and the Corona virus as a result of immune disorders in obese patients, including an increase in the rate of inflammatory factors and an imbalance in the functions of some immune cells, which increases the mortality rate by up to 48% and an increase in The probability of being admitted to intensive care is 74%. Professor Asem Al-Fida also addressed the most prominent barriers that lead to delayed health care delivery and obesity treatment, which include several reasons, including the lack of awareness through the lack of awareness of obesity as a chronic disease that results in many complications, and the loss of will and desire to lose weight, so Dr. Asim pointed to Community awareness of obesity symptoms and risks should be raised through health personnel and various media, in addition to changing wrong behaviors.

From this point, Professor Khaled Al-Omari pointed out the importance of changing the health pattern as a major gateway to treating obesity, which includes a healthy diet for weight loss ranging between 1,200 to 1,500 calories for women and 1,500 to 1,800 calories for men and a greater intake of low-calorie foods that create a feeling of satiety such as fiber. , Including vegetables, fruits and grains such as oats, lentils and soybeans, and reduce the intake of salts and sweets that contain a high proportion of sugars and saturated fats, and replace them with a small amount of heart-healthy fats such as olive oil, canola and walnut oil. In addition to exercising daily for 60 minutes according to the American Diabetes Association, which leads to reducing the chance of developing high blood pressure and blood sugar level by 5%, reducing the chance of developing fatty liver disease and polycystic ovaries by 10%, reducing the chance of developing heart disease and knee osteoarthritis By 15%, and reducing the chance of developing type 2 diabetes by more than 15%. The conference highlighted the importance of observing the weight of adolescents and children in our societies, where the rate of obesity in children reaches 17.4% due to lack of physical and movement activity, in addition to the preference for eating fast foods that in turn contain a high amount of calories and unsaturated fats. Doctors also warned young people against engaging in electronic games and abandoning sports activities, which resulted in an increase in obesity among adolescents, especially in the last five years. Dr. Saud Al-Safri, President of the Association for Obesity Studies, shed light on the new guides for the treatment of obesity in the Kingdom of Saudi Arabia, where she clarified the importance of changing the lifestyle by practicing sports and healthy food with the effective role of medical and surgical intervention if necessary, and also recommended the importance of activating the role of government organizations in fighting obesity .

In this regard, it is necessary to intervene in the treatment of obesity through a multidisciplinary medical team, including obesity surgeons, nutritionists and psychiatrists, to develop an integrated treatment plan that includes the proposed treatment methods, including obesity surgeries, and to provide the necessary support and nutritional advice. The conference was also the nucleus for publishing the latest local scientific papers to clarify the importance of treating obesity. In addition, it concluded its activities with a series of questions and answers between doctors and specialists, which aimed at a deeper understanding of solving the problems of obesity and related diseases, especially in the time of the pandemic Covid-19.

These were the details of the news Novo Nordisk launches the second Saudi obesity conference for this day. We hope that we have succeeded by giving you the full details and information. To follow all our news, you can subscribe to the alerts system or to one of our different systems to provide you with all that is new.

It is also worth noting that the original news has been published and is available at saudi24news and the editorial team at AlKhaleej Today has confirmed it and it has been modified, and it may have been completely transferred or quoted from it and you can read and follow this news from its main source.

Risk of severe Covid-19 high for obese people, regardless of other factors

Non-obese Vietnamese Americans are 60% more likely to have diabetes