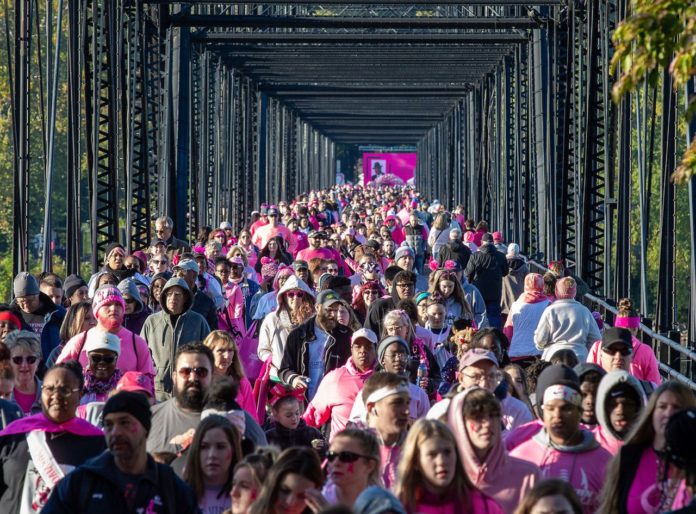 Taking part in the Making Strides Against Breast Cancer walk in Harrisburg is a personal story for Sue Engels.

“I walk every year for my mom,” she said.

And her friend, Sage Hayes, had been diagnosed with breast cancer weeks before Engels’ first Making Strides walk — but her friend, now a survivor, still walked alongside Engels soon after her surgery that year.

Each year for the last four years, Engels has taken part in the festive celebration of pink costumes and the joyous meetings of thousands of survivors and their supporters, sharing similar stories of survival, joy and remembrance.

“The energy is unbelievable,” she said. “To be in a crowd like that with so much love and the spirit of hope and compassion, it’s like nothing I’ve ever experienced before.”

But because of the coronavirus, the Making Strides of Harrisburg event is going to be a little different this year. Instead of a large gathering for a walk around City Island and Front Street, participants will stay in their cars for a “drive thru” version.

That’s not going to stop Engels.

“I don’t think the spirit of hope has been dampened at all,” Engels said.

The 23rd Making Strides of Harrisburg is set for 10 a.m. to 1 p.m. Saturday in the parking lot of the Capital BlueCross Building, 2500 Elmerton Ave., Harrisburg.

Normally, the event would bring upwards of 6,000 participants from all around central Pennsylvania, said Yalanda Rice, senior community development manager with the American Cancer Society.

“It’s really a phenomenal event when we have our walk,” Rice said. “The atmosphere is completely inspirational from start to finish.”

This year, though, Making Strides events across the country are either being held virtually or through some other in-person alternative that still adheres to social distancing guidelines. In Harrisburg, it’s going to be a drive thru.

Participants will stay in their cars as they stop at different stations in the parking lot, receiving goodie bags, making donations and celebrating.

While it won’t be the same, participants are still excited. And they say it’s still going to be festive.

“I have no intention of driving through quietly,” Engels said. She and her teammates are going to decorate their cars, as participants have been encouraged to do, sporting them with pink balloons and ribbons. “We’ll be in our cars, but hopefully we can still wave, scream and be a little crazy.”

Donations have been down since the start of the pandemic for not just the American Cancer Society, but for charities and non-profits in general. Rice did not immediately have a figure on how far they’re down, but she said that is not the focus this year. Their goal is just to raise what they can, despite the pandemic, for this good cause.

Instead of holding fundraisers this the year, Engels said her team has been reaching out and seeking donations, often times through social media. She’s happy to see the donations that she has been getting, knowing that many people are facing struggles of their own through the pandemic. It warms her heart, she said, when friends who have gone through furloughs and layoffs still approach her to make a donation.

“It has been tough, but people are still doing what they can,” she said.

That’s because there is one thing that hasn’t changed in 2020, she said. The spirit of the event.

Participants can register for Making Strides of Harrisburg online, where they can make donations, too. They can also just show up sometime between 10 a.m. and 1 p.m. Saturday. Rice said the entire “drive thru” takes about 15 minutes.

You can learn more on the Making Strides of Harrisburg website.

Why do diabetes and heart disease boost Covid risk?

Diabetes Foundation of Mississippi hosts virtual walk due to coronavirus