A new market study report by The Insight Partners on the Weight Management Devices Market has been released with reliable information and accurate...
Read more
Home CANCER Mum who had cancer trial stopped because of coronavirus said Liverpool ‘saved...
Facebook
Twitter
Pinterest
WhatsApp 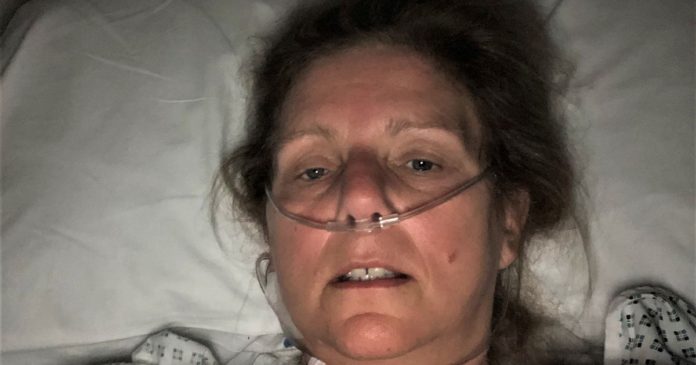 A mum who desperately wants to live long enough enjoy more time with her young grandchildren was left feeling hopeless when her cancer drug trial was stopped during lockdown.

Carol Player, 57, had originally been diagnosed with an ocular melanoma five years ago and had her eye removed in St Paul’s Eye Hospital in Liverpool.

Sadly, in November 2019, doctors found the cancer had returned in her liver which meant Carol had to have part of it removed in February this year.

Carol said: “After the operation the surgeon told me my liver was very clean – ‘pristine’ were his exact words.

“However, it was still running through my blood. So, two months later, I had a follow up scan and it showed deep within multiple areas it had travelled through the blood back into my liver.”

As Carol had already had a section of her liver removed another operation wasn’t possible, but a promising cancer drug therapy called Delcath Melphalan, which is where chemotherapy is administered through the groin to saturate her liver, was made available to her on the NHS.

Carol, who lives in Birmingham, was all set to take part in the trial funded by the NHS in Liverpool which would cost a total of £160,000 broken down into four treatments of £40,000 each.

That was until the coronavirus pandemic hit the UK. As a measure to keep NHS services free the government made the decision to cancel many cancer trials in England, leaving sufferers like Carol in despair.

She said: “Who is [Health Secretary] Matt Hancock to play God? He can’t decide that – this is real people. I’ve paid into the system, since I was 16. I’ve never asked for anything off anyone in my life. I’ve never had to claim for anything.

Adding: “The government are putting all these measures in place and stopping people from living – they’re causing death.”

Desperate to continue with the trial, Carol cashed in her entire pension to fund the first round of treatment and her son, Adam, set up a Gofundme page to try and raise the money for the rest.

When the ECHO ran Carol’s original story in July this year the response, Carol said, was nothing short of “amazing”.

She said: “Liverpool, you know, I just can’t praise it enough. I seriously can’t because they have been so giving.

“All the support I’ve had with little messages that came through to me. I just feel that I’m part of it and Liverpool has saved my life.

“I just want to thank everybody that donated in Liverpool.”

After we highlighted Carol’s story, she has been able to raise enough money for the second round of treatment which she has recently undergone and, so far, has had an incredible effect on her cancer.

She said: “On September 13, I had a follow up scan to see how the first treatment had gone.

“It showed up that three of my tumours have actually disappeared and four others had significantly shrunk in size.”

In two months time, Carol will have a follow up scan at Clatterbridge Hospital to see how the treatment is progressing, but in the meantime, she still needs to raise enough money to complete the last two rounds of chemosaturation.

If you would like to donate on the Gofundme page set up to raise money for Carol’s treatment click here.

The drug Melphalan is licenced to use in the UK and the way Carol needs it administered, she said, is widely used in the Netherlands and Germany on a daily basis.

Carol explained: “It goes in through the groin straight up into the liver and it saturates the whole liver with chemo.

“They’ve also got the lines in your neck which take the blood, cleans it, and it puts it back into your body, taking all the disease part of the blood away as well, which is why it’s so successful.”

Carol said she’s not only working to raise the rest of the money – but also awareness – that desperate cancer patients need to have their drug trials reinstated by the government as quickly as possible.

She said: “I’ve got three year old twin grandsons, Jack and James, who were actually born on my birthday, which is lovely.

“I’ve got the boys to live for and I’m not ready to die, you know.”

She added: “I just feel that the NHS has deprived me of my treatment. It feels like my human rights have been taken away from me.

“Why should I have to rely on the public who have also paid their contribution to help me with my NHS treatment?

“The treatment has been taken away from doctors in Liverpool. They’re amazing, but they are devastated, absolutely devastated. They want the trials back up and running.

“If I hadn’t taken it upon myself to get that first treatment, where would I be now? My tumours would have grown? I wouldn’t have stood a chance.

In August, The Guardian reported more than 1,500 clinical trials of new drugs and treatments for cancers, heart disease and other serious illnesses have been permanently closed down in Britain due to the Covid-19 pandemic.

And an additional 9,000 have been suspended with most needing a major cash injection if they are to be reactivated.

Keep up to date with coronavirus cases in your local area by entering your postcode below.

Emlyn Samuel, head of policy for leading cancer charity Cancer Research UK, told the ECHO that the government’s decision to pause many cancer trials at the peak of the pandemic has meant thousands of patients are likely to have missed out on experimental treatments.

Mr Samuel said the charity is working with the government to ensure the trials get back up and running as soon as possible and will be protected from “further waves of Covid-19”.

He added: “The major disruption to cancer care caused by the pandemic has added additional stress and anxiety to many cancer patients’ experience.

“It’s completely understandable that people look to any means when they are in extremely difficult situations and, concerningly, we’re starting to hear more stories of patients resorting to paying for cancer treatment.

“But even before the pandemic cancer services were stretched. The upcoming spending review is the ideal opportunity for the government to show its commitment to the NHS and invest in staff and equipment to give cancer patients the best chance of surviving their disease.”

The ECHO also contacted NHS England for comment on when cancer drug trials will be fully reinstated in the NHS.

A spokesperson said while they can’t comment on individual cases and no decision to stop trials was taken nationally, a number of clinical trials “had to pause during the pandemic to keep people safe”.

NHS England said many people continued to receive experimental treatments, and studies are showing more are now starting up once again.

Why do diabetes and heart disease boost Covid risk?

Diabetes Foundation of Mississippi hosts virtual walk due to coronavirus